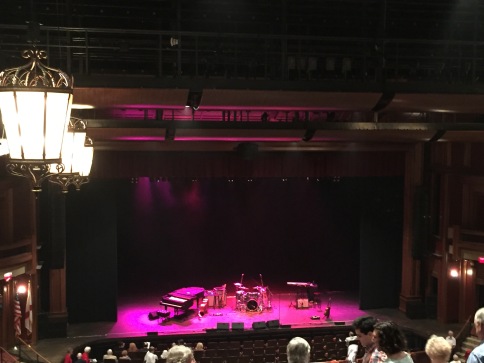 To say I went to a Chris Botti concert this Valentine’s Day would be an egregious understatement. To say I merely witnessed a spectacular performance by one of the best trumpet players alive would also be somewhat disrespectful. I just can’t force myself to say something that isn’t completely true. The truth is I witnessed one of the best all around musical performances, period. And Chris Botti was not the only reason to attend this performance. His back up band, musical composition, and use of various guest musicians are the reasons why anyone reading should attend the next Chris Botti concert near them. So no matter what highlights I write down next, just know my words will not be able to do this concert justice. However, I will try.

First off, the performance began on time, something even Botti doesn’t shy away from bragging about. As soon as the time read 7:30, Chris Botti and his band went straight to business. Passionate red stage lights draped the beginning number, and the music matched perfectly. There was a back and forth between Botti’s trumpet, and Sandy Cameron’s violin. A ferocious performer who throws herself into her music as she flies across the stage with every note she plays. The back and forth became increasingly aggressive as the two traded harmonic blows like prizefighters. On and on they went until Botti’s trumpet triumphed and screamed for peace. Cameron relented backstage, and the tension on stage cooled down with the lighting. After that, Botti and his band scatted around a few jazz numbers until Botti grabbed the microphone and did what he does best: interact with the crowd. 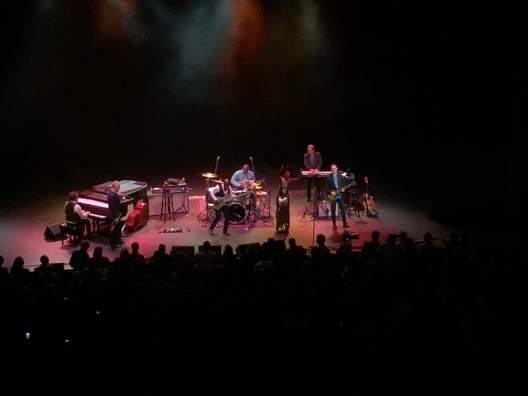 It was when he first began speaking about himself and the band that everyone in the audience realized that this man was born for the stage. If he wasn’t gliding through a song he was easing the audience into the mood he wanted them in. Every song became increasingly interactive and compelling as the energy being fed to the audience by the performers was given back tenfold. The passion was so back and forth that at one point Botti came off stage to perform in the audience.

That said, the band that backed Botti up was so enticing that they deserved a show of their own. In fact, they basically got that. Nowhere was this more apparent than the string of songs “You Don’t Know What Love Is”, “Tango”, and “Kashmir”. During the first song Botti stepped aside and allowed his band to let loose for the first time that night. That’s when drummer Lee Pearson stole the show. As soon as the pianist led him into his solo my jaw was permanently dropped. With such ease and grace, Pearson danced around his drum kit playing what seemed like every possible rhythm at once with a charming smile on his face the entire time. “Tango” gave time for his bassist to show off as he ran his fingers up and down bouncing the audience’s expectations all over the place.

Once his band was able to show off, Botti introduced Cameron back on stage to perform a solo. Once again she entranced the world with her slick movements across the stage and fierce music. Just as everyone thought it couldn’t get anymore impressive with Cameron, the band chimed in and seamlessly transitioned with her into a cover of “Kashmir” by Led Zeppelin. All of a sudden this jazz show flipped the switch and became a rock opera. What followed was cover after cover of classic songs like “Hallelujah” by Leonard Cohen, Time to Say Goodbye” by Andrea Bocelli, and “Nessun Dorma” by Pavarotti. Chris Botti integrated all types of music into his band’s sound. Making the night a rollercoaster of emotions, and forever raising the bar for what I expect from a concert.

I went into Tuesday’s performance expecting to be entertained no doubt, but I ended up being inspired. I hate to throw the term around loosely but I mean it when I say Chris Botti and his band members are geniuses. To combine such an impressive stage presence with talented musicians made me fall in love with music all over again. Music is an energy that provides life and reason to all facets of this world. It makes the absurd enjoyable and the mundane bearable. It’s where we run to when words and social queues can’t express how we feel. Somewhere within those vibrating sound waves we find meaning and on that Valentine’s Day I found love. That’s the Chris Botti effect.