The Presidential Search Advisory Committee (PSAC), charged with selecting semi-finalists from an applicant list for on-campus interviews, convened with its Chairman, Ed Burr, on Friday. Burr was physically absent from the meeting and present via telephone call.

Student protesters, along with faculty members, attended the meeting to voice their concerns about the search, calling for a “reset of the search” and a “restructuring of the PSAC” to include more student and faculty representation. As it stands, the 27-member search advisory committee has only four students and three faculty members, accounting for only 26 percent of the committee. The student protesters called for a new 15-member committee comprised of one-third student, one-third faculty, and one-third “other” outside interests.

In opening statements, Chairman Burr defended the committee’s work, saying “every decision has been open and transparent and in the interest of hiring the very best president to lead FSU now and into the future.”

The FSU presidential search has attracted a considerable amount of controversy, notably from some faculty and student groups, over its handling of the search process. In e-mails obtained by The Associated Press in July, the former presidential search consultant, William Funk, voiced his skepticism of the search to Burr, stating his belief was that the university was trying to “concoct a competitive process” after the committee voted to halt its search after  interviewing the first candidate, Florida state senator Thrasher. Funk later resigned after the university’s Faculty Senate passed a resolution saying they had lost confidence in his ability to manage the search.

In an initial forum for public comments, students and faculty speakers were all unanimously opposed to Thrasher, a former speaker of the House who is also chairman of Gov. Rick Scott’s re-election campaign. They blasted his lack of academic credentials and questioned his ability to lead FSU into the top 25 of the national rankings as a research institution, an initiative set in place by former FSU president Eric Barron, who left earlier this year to become president of Penn State University.

“We will only succeed in attracting the best students and faculty across the country and around the world if people take us seriously,” said Michael Buchler, a professor at the FSU College of Music. “We deserve a serious president.” 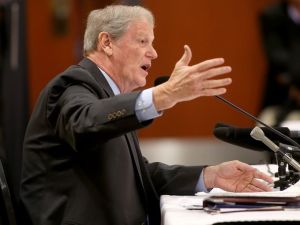 “I fear that the pool will be seriously compromised if we continue to keep Sen. Thrasher’s candidacy on the table”

Later in the meeting, a motion was introduced to restructure the committee to include more students and faculty. In fear of losing more qualified applicants, the committee voted against the motion by a resounding 23-2 margin.

After the failed vote, the meeting was thrown into disarray by the protesters, who began to shout at the committee to “reset the search” and calling the presidential search process “a sham.” Two were led out by police, and the meeting was suspended for 40 minutes.

The divisive nature of Thrasher’s candidacy was highlighted by voices of disapproval and dissent from within the search committee itself, with a motion to remove Thrasher from further consideration for the presidency quickly leading to an atmosphere of contentious debate.

“I fear that the pool will be seriously compromised if we continue to keep Sen. Thrasher’s candidacy on the table,” said English professor and former Faculty Senate president Eric Walker. “I’m ready to tell him you’re not in.”

Alberto Pimentel, the presidential search consultant, addressed the concerns of the committee, saying he had spoken to his eight recommendations for president and that they had committed to seeing the process through, regardless of Stokes and Thrasher being in the candidate pool.

Al Lawson, member of the search committee, showing frustration during a meeting.

Al Lawson, a former state senator who once served in the legislature alongside Thrasher, came to his defense, saying that it would be wrong to eliminate Thrasher from consideration after he had funneled hundreds of millions of dollars to the university. The influential Republican state senator also holds undergraduate and law degrees from Florida State.

When Pimentel was asked whether Thrasher would be considered for president at a university other than Florida State, he replied, “Not outside of Florida.”

Faculty committee member Marcy Driscoll, dean of FSU’s College of Education, urged her colleagues to think beyond Florida and “in order to reach the top 25, [of national rankings] we have to be on the national and international stage.”

Student committee member Melissa Mears, a third-year law school student, added her voice to the growing faculty and student chorus of disapproval of Thrasher’s candidacy, saying he lacked the academic qualifications necessary to lead FSU in its quest to become a top-25 nationally ranked institution.

The vote to remove Thrasher from further consideration failed by a shaky 18-8 margin, with student and faculty members of the committee unanimous in their opposition to Thrasher, underlining the committee’s conflicting outlook on Thrasher going forward.

The 11 semi-finalists to be interviewed by the search committee include a former university president, former provosts, and a university system chancellor. On-campus interviews will be held Sept. 8 and 9, with the PSAC meeting for a final time on Sept. 22 to recommend no fewer than three finalists to put forward to the Board of Trustees. The Board is expected to select Florida State’s next president on Sept. 23.